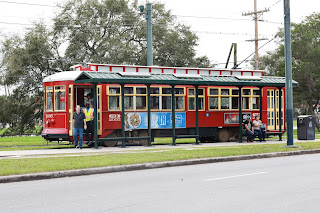 Even in a town like New Orleans, where the cost of a meal for a family of 3 ranges between $30-60, this can add up quickly.

However, as my wife said, other couples pay for dates, movies, theatre, and vacations, but for us, spending our money on eating out and critiquing food and food venues is one of the things we both love doing together. And it is also one of the only things we can take our kids along to.

Unfortunately, when I lost two income streams last year, all that spending on restaurants went right on the credit card and it started to add up quickly.

We also had the added expense of a new little member of our family coming into this world. So due to the hassle of two young kids at a restaurant and the budget constraints, learning to satisfy our eating out fix by cooking better meals at home became our prerogative.

My wife's solution was to cut out the drinking, which was hard for me. One of my favorite things about eating out is getting to try new beers and cocktails that I wouldn't otherwise have had the chance to try.

But she is right that cutting out the drinking shaves about 20% off the bill at the restaurant. My solution is eating more at home with better planned and premade meals that are satisfying and filling.

One way we tried to solve this was to walk down the street  (in our case, we chose Magazine St.) which had a lot of little restaurants and order small appetizers as we went along.

We hopped on and off the streetcar for a total transportation cost of $9 for the day + my daughter really enjoyed it so we didn't have to hire a babysitter.

We were getting a variety of different food experiences and at the same time not breaking the bank.

One other idea we tried was ordering premade hot foods from a grocery store and having a picnic at the Audubon Park.

You can get things like a whole 16" pizza from Rouses for $10.99,  feed the whole family while avoiding the tip in a location of your choice, thereby saving money and still having a great time.


Another great way we save on the food budget is by growing our own veggies and spices. Thankfully here in New Orleans, we get so much rain that we can cut down on watering costs and certain spices grow like a weed.

I grow thyme, parsley, and basil in the summer as well as tomatoes all year round.
Broccoli grows well in the "winter" months (because is 75 degrees really winter? Come on people) as does lettuce and other leafy greens.  The seeds will cost you about $1 and will give you produce all year round with a little bit of time invested and will save you that whole wallet trip to whole foods (my very guilty pleasure). You can also lookup a planting guide from your local University agricultural center. Here in New Orleans, I use the Tulane planting guide.

Making things from scratch can also save you a lot of money and give you superior food.

Bread is one cheap and easy option that you can make at home.

I'm including a little recipe below that you can use as bread dough or pizza dough. A little tip, if you let it rise overnight the dough gets very manageable and elastic, great for pizza. You can store this in the fridge for weeks at a time in ziplock bags lined with olive oil.

Combine your dry ingredients (flour, yeast, sugar, salt) then add your water. Some people like to make a well in the center of the flour mix. I don't bother.  I just use a bowl and mix it with a spoon until it forms a lumpy consistency and holds together.

Then I spread flour on the counter and knead for about 5-10 minutes depending on how lazy I am. I have been warned not to over-knead as it can make the bread texture less desirable. Then I just take it and oil the bowl I took it out of, put the dough in and let it rise for an hour or until it doubles in size. Then take it out knead it very gently for a few more minutes and put it in an oiled loaf pan.

When it doubles in size again I put it in the oven at 450 Degrees for about 20-25 minutes.

I usually leave the oven light on while I'm baking to watch the bread and make sure it's not burning and I have cooked it at different heats for different times, but I find that when you cook it on a higher heat, you get the soft interior you're looking for with a crispy crunchy outside.

You can also spray water on the outside of the bread as you put it in the oven to give it extra crisp. To check for doneness you can tap on the center of the bread and listen for a hollow sound rather than the thud it will make if it's undercooked.

If you're using this recipe for pizza you can do the same first steps but I usually separate this into two-three pizzas and roll/toss this dough into a pizza shape. I also sometimes leave out the sugar for the pizza dough.  If you want a thinner crust, I don't bother with the second rise most of the time.  I just roll it out and put it on the pizza pan.

You can really put whatever you like on it, almost anything works for pizza. One of my daughter's favorite toppings is honey, she calls it candy pizza, I add that after I take it out of the oven.

How do you all save money while still finding ways to enjoy the eating out experience?
Let me know in the comment section. I'd love to hear your ideas.

Stay tuned for more recipes and brain dumps from @hollowlegkitchen 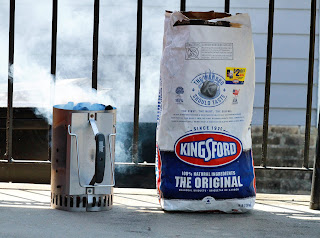 Loving the Taste of the Game

If you're anything like me, one of your favorite past times in the summer months is firing up the charcoal grill and cooking up new recipes. This year, thanks to Kingsford Charcoal I got to try out my hand at making brisket for the first time, following a recipe inspired by the Texas Rangers in Kingsford Charcoal's brand new book Taste of the Game. The recipe I used was their Bases Loaded Sandwiches, oven-roasted bacon over a perfectly grilled brisket and seared baloney with a heavy helping of BBQ sauce, this was a delicious addition to my go-to grill staples. And one of the things I loved about this book was how it captured the essence of each team with unique and cultured recipes that state that everyone is a part of our great American baseball teams. This book is a wonderful gift for a baseball fan or even just someone who loves the grill and cooking things just right. I think the biggest challenge of making this was keeping my temperature just right on the grill, it 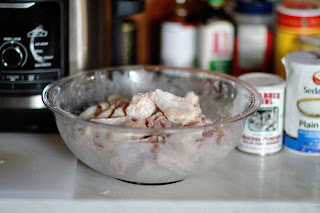 One of the best things I've discovered in that past year is how to make air-fried chicken wings just right. My wife is a big lover of chicken wings but unfortunately suffers from a sensitivity to the amount of grease in deep-fried chicken. So learning that we are able to make them in an air fryer and avoid all that extra oil has been a lifesaver and a great treat for our household. It saves us a lot of time on the mess and clean up as well, no popping oil all over the stove if you know what I'm saying. I usually make my air-fried wings with a very simple base for getting the skin crispy every time. I usually mix about a teaspoon of salt and a teaspoon of baking powder (yeah weird huh? but it works wonders) for every ten wings. I coat them evenly rubbing it in like if we were grilling and then I let them sit for about an hour or two. You will see as the time goes by the chicken will lose a ton of its water content, and that is perfect for you and getting that crisp crunch